Steve Stratton started his U.S. Army career at the White House Communications Agency supporting the communications needs of Presidents Gerald R. Ford and Jimmy Carter; Vice Presidents Nelson A, Rockefeller and Walter F. Mondale; and Secretary of State Henry Kissinger. Steve’s work took him around the world introducing him to new cultures, ways of thinking, and the various agencies projecting and protecting American interests abroad. The jump from WHCA to the U.S. Secret Service was an easy transition, but after several years, Steve left for the commercial sector.

Steve was awarded his Green Beret in 1986. From the 80s through 2000 he deployed with 20th SFGA on counterdrug and training missions in the SOUTHCOM region. During this time his civilian work included supporting CENTCOM, SOCOM, and DIA. Today he develops cyber security products that support the DOD and Intelligence Community.

He received is BA in 1986 from St. Leo University at the MacDill AFB campus. A cyber security software development manager and novelist, Steve subscribes to Joco Willink’s 0430 am start-the-day-early philosophy. A Northern California native with Redwoods in his blood, Steve is now in love with the Rocky Mountains and western states. When not writing or working, Steve splits his time between Aurora, Colorado and his cabin in the Tarryall mountain range west of Denver for mountain biking, hiking, and hunting. 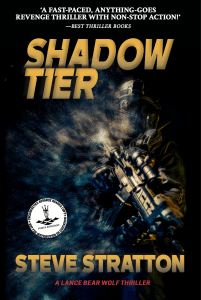